For those who suffer from stress incontinence, overactive bladder, or mixed incontinence, simple activities like exercising, laughing, walking, or traveling can cause unwanted leakage. At the Balanced Body Center, we offer a simple, natural approach to treating urinary incontinence and bladder leakage. Our Pelvic Wave Therapy is a non-invasive, painless, and comfortable treatment that doesn’t involve any invasive procedures. Pelvic Wave Therapy works by strengthening the pelvic floor muscles with pulsating magnetic fields.

Pelvic Wave Therapy provides a non-surgical, non-invasive therapy for treating urinary and fecal incontinence, incontinence after radical prostatectomy, pelvic pain, erectile dysfunction, and other sexual disturbances, hemorrhoids, vaginal tonus, and more. Unlike any other therapy, Pelvic Wave Therapy helps all of the muscles of the pelvic floor to rebuild strength and endurance, thus reestablishing control of the bladder.

The therapy is completely painless. The patient sits fully dressed in a comfortable chair. The patient feels a small vibration or tapping while sitting. They will even feel the pelvic floor muscles contracting as they are rehabilitated. The treatment takes 20 minutes 2-3 times per week. Therapy usually consists of 24 treatments to achieve maximum outcome. For many patients, the treatment will cure incontinence completely. Others may need periodic treatment to maintain results. It's that easy and effective!

Pelvic Wave Therapy is based on a revolutionary technology called Extracorporeal Magnetic Innervation (ExMI). This technology produces highly focused magnetic fields that vary in time/force and that penetrate deep into the perineum, activating the pelvic floor muscles by stimulating all branches of the pudendal and splanchnic nerves. It’s essentially like a “workout” for your pelvic floor muscles.

Incontinence that occurs during coughing, sneezing, laughing, lifting heavy objects, or performing other movements that put pressure or stress on the bladder. This results from weak pelvic muscles or a weakening of the wall between the bladder and (in women) the vagina. This weakness can be due to pregnancy and childbirth or from lower levels of the hormone estrogen during menstrual periods or after menopause.

Incontinence after feeling a sudden urge to urinate; the inability to control the bladder, such as while sleeping, drinking water, or listening to water running.

Incontinence that occurs when the bladder is constantly full and reaches a point where it overflows and leaks urine. This condition can occur when the urethra is blocked due to causes such as kidney or urinary stones, tumors, or an enlarged prostate. It may also be the result of weak bladder muscles due to nerve damage from diabetes or other diseases.

Incontinence that occurs when physical disabilities, external obstacles, or problems in thinking or communicating prevent a person from getting to a bathroom before they urinate. 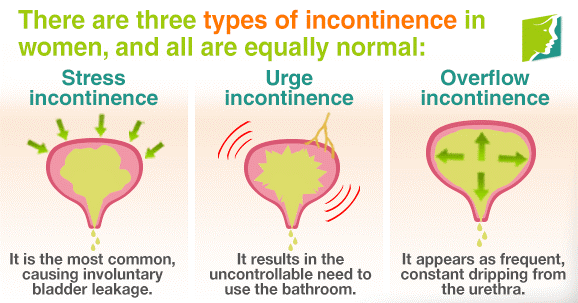 Pelvic Wave vs. Other Treatments

It is estimated that urinary incontinence affects almost 20 million women. It is one of the most prevalent diseases in the US; however, it is often ignored since it is not life-threatening. Currently, women in the U.S. spend over 12.4 billion dollars on incontinence treatments. Additionally, there are many young women with mild forms of incontinence that avoid reporting the condition and ignore the symptoms, believing there are no easy solutions. This does not even include the amount spent by the male population afflicted by incontinence (about 5 million men in the U.S.) Incontinence is a common problem in elderly men, men with prostate problems, and diabetics.

The average cost of bladder surgery is $7,500 and the results are often poor and short-lived. Current alternative treatments to surgery include adult diapers, pads, and vaginal inserts. Pelvic Wave Therapy is the only effective, non-invasive and pain-free corrective process for this condition, and The Balanced Body Center is proud to offer this type of care.

'The Efficacy of ExMi in the Treatment of Stress & Urge Incontinence'
*Presented at the XVIth Congress of the European Association of Urology, Geneva Switzerland, April 2001 (Test performed at the Rambam Medical Center, Haifa, Israel)

'Impact of ExMi on Quality of Life in the Treatment of Stress Urinary Incontinence'
*Presentation of the American Urology Association, Atlanta, GA, April 2000

If you're interested in finding out if you're a candidate for our Pelvic Wave Therapy, call our office at (704) 849-9393. To learn more, you can visit https://pelvicwave.com/.